Lights on the New River Bridge?

The West Virginia Department of Transportation may install lights on the New River Gorge Bridge in West Virginia. The lighting would be turned on at dusk, then turned off after a couple of hours. “It’s still in the ‘idea’ phase,” says DOT project coordinator Rob Pennington. Not everyone is lighting up over the proposal. “This bridge is in a national park. You’ve got dark skies issues,” says Kenny Parker with the New River Climbers Alliance. “Plus, it’s just cheesy.”

Seven access points and campsites are being planned along a 117-mile stretch of the French Broad River by the Western North Carolina Alliance. Construction of the first campsite has already begun, and the entire paddle trail should be completed by next summer.

A new species of giant crayfish was recently discovered  under a rock in a stream bed that joins the Tennessee River. The new crustacean, dubbed Barbicambarus simmonsi, is five inches long, twice the size of most other crayfish found in the region. According to researchers, the discovery underscores the need for more scientific exploration of land and species in the U.S. Celebrate the new crayfish on the 22nd of this month, which has been declared International Day for Biological Diversity by the United Nations.

“The woods and the wind will be good for their hearts and souls.”—President Franklin Roosevelt, at the dedication of Shenandoah National Park in 1936. Shenandoah turns 75 this year. 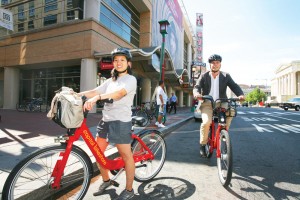 My Bike is Faster Than Your Car

Bikes are faster than cars in downtown Chattanooga, according to a new study by the Chattanooga-Hamilton County Regional Planning Agency. The study measured door-to-door travel time of driving, mass transit, walking, and cycling. Surprisingly, taking a car was the slowest mode of transport studied over a number of routes, due to the time it takes to walk to a car, stop at lights, park, and walk to the destination.