MagazineMay 2014Five Bands to Catch on the Southern Festival Circuit

Five Bands to Catch on the Southern Festival Circuit

One of the best things about festival season is discovering new music. Catch these up-and-coming bands at this year’s regional festivals…

This hard-hitting duo delivers plenty of distorted power from a stripped down two-man lineup. Fans of old-school Black Keys should take notice as this rising group delivers plenty of primitive bluesy fuzz with authentic throwback vibe. Straight from the bashing and riffing of drummer Chris St. Hilaire and guitarist Tash Neal, standout songs like “The Sound” from the band’s self-titled debut album display gritty homage to the British psychedelia of Cream and Zeppelin. It’s loud retro greatness that’s just right for big stages.

Willie Watson made his name as a member of string band revivalists Old Crow Medicine Show. He’s now flying solo, letting sparse strings and his soul-piercing tenor do all the work. Watson just released a debut solo album, Folk Singer Vol. 1, which was produced by David Rawlings with help from associate producer Gillian Welch. The 10-song set unearths a range of gems from the American folk songbook (“Midnight Special,” “Mexican Cowboy”) and offers a prime example of the power that can come from one man and his acoustic guitar. 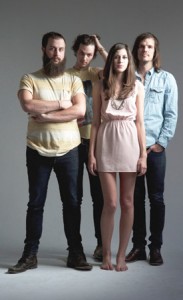 Houndmouth hails from a small town in Indiana and delivers electric folk rock with plenty of heartland realism. On last year’s debut From the Hills to the City, blue-collar themes dominate edgy fist pumpers like “Ludlow” and “Penitentiary,” but the songs also manage to stay grounded with infectious hooks and soaring three-part harmonies. Lead track “On the Road” gets downright poppy with a playful piano bounce and a catchy chorus.

Sol Driven Train is a party band of the highest order. The South Carolina-based crew comes from sun-soaked Charleston and likes to get crowds moving with a blend of Southern-flavored roots rock that’s propelled by funky horn blasts and Afro-Caribbean grooves. The five-piece group has been together for nearly a decade and a half, so years of hard touring have resulted in status as a beloved regional mainstay and a tight live show that never fails to please.

Emerging from the fertile independent music grounds of the North Carolina Triangle, this acoustic duo delivers poignant progressive folk tunes that draw on a range of influences, including early Appalachian mountain songs and vintage country ballads. Since musical partners Andrew Marlin (guitar) and Emily Frantz (fiddle) started playing together at a local Chapel Hill jam back in 2009, the group has released three albums. The most fully developed is last year’s This Side of Jordan, a rustic effort featuring front-porch tales of heartbreak and redemption that are filled out by a full backing band. The centerpiece, though, is still the harmonies, as the voices of Marlin and Frantz come together with the beauty of an endless vista.