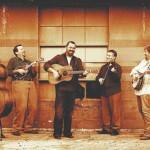 When Alison Krauss decided to take some time off from bluegrass and tour with rocker Robert Plant, Dan Tyminski was faced with some downtime. Instead of cooling his heels, Tyminski—best known as the voice of “Man of Constant Sorrow” from the O Brother, Where Art Thou? soundtrack—called on some old friends, including Union Station mate and bassist Barry Bales, Mountain Heart mandolin picker Adam Steffey, banjo stalwart Ron Stewart, and Blue Moon Rising’s Justin Moses, to cut a record and hit the road. Wheels, the Dan Tyminski Band’s June release, entered the Billboard Bluegrass charts at #1, and the band has been getting rave reviews for their live performances.
———-

BRO: How does a boy from Vermont get hooked on Appalachian music?

DT: I had parents who were music enthusiasts. My parents went to a lot of fiddle contests and square dances, so any time there was live bluegrass or country music around, I got to go with them to hear it. And I spent a lot of my youth traveling from festival to festival throughout the summer. I made new friends and played music. I got to do that from the time I was six years old, and I still do it when I can now.

BRO: You have been an integral member of Union Station for over a decade and now you are on the road leading your own band. How are those roles different?

DT: The biggest difference is that off the stage there is a lot more responsibility with caring for band members, logistics, and making sure everyone goes to where they need to be. Once I take the stage, the roles are very similar. I want to make great music with the people I am on stage with.

BRO: Compared to what you do with Union Station, are you flexing any different musical muscles with your band?

DT: The stuff that this band does really focuses on the heart of what bluegrass is to us. We venture in more directions than Union Station, which has lot more pop flavor there and is not quite so centered in traditional bluegrass.

BRO: Tell me about recording Wheels.

DT: This record was born out of the opportunity to play with these guys. It wasn’t done with any particular theme in mind; we didn’t gather songs to express any certain views or opinions. The five of us just wanted to make music. With that in mind, we tried to find songs that suited us as a combination of players that were album worthy. If we are trying to say anything, it is that this is what we think bluegrass music is to us.

BRO: I know that you are an avid golfer. What is more difficult—writing a classic bluegrass tune or sticking a five iron pin high?

DT: That’s funny, because I’m at the golf course right now. I’ll be teeing off in about an hour. Both of those things are very difficult, but both are immensely rewarding as well.