Go OutsideHogwash on the House Floor: N.C. Bill Will Shield Big Ag from...

In recent years, Smithfield Foods and its subsidiaries have dealt with countless lawsuits over the industry’s massive amount of hog waste and its negative effect on surrounding communities. From water and air pollution, to health concerns and income loss, residents of these rural communities (who are also disproportionately low-income and/or minority populations) have stood their ground against Smithfield and its cohorts.

Yet House Bill 467 will cap the amount of money residents can collect from nuisance lawsuits to his/her current property value. Because the hog industry’s expansion in Eastern North Carolina has exponentially lowered property values in the area, this cap on compensation will be staggeringly low.

Critics of the legislation believe the North Carolina Legislature is putting the profits of foreign-owned Smithfield Foods above the democratic rights and long-term health of Eastern North Carolina residents. They believe the law is calculated, designed to keep the people who deal with the region’s tainted air and water quality, from receiving full and rightful compensation for their hardships and health concerns.

Dan Crawford, Director of Governmental Relations for the North Carolina League of Conservation Voters, wrote “It’s despicable that the bill sponsors attempt to equate the long-term suffering of their constituents to a ‘nuisance’ that can be silenced by a foreign entity.”

Critics are also suspicious of the way House Bill 467 was brought to vote. On Thursday, House Speaker Tim Moore (R-NC) deviated from the legislative calendar, skipping ahead dozens of bills to vote on the legislation without recognizing the bill’s sponsor or calling for discussion.

Representative Jimmy Dixon (R-NC), a retired farmer, supported the legislation because he understands how much money farmers are forced to spend on such legal battles. Indeed, proponents believe the law will help North Carolina farmers by providing clarity on damage and nuisance lawsuits.

Andy Curliss, CEO of the North Carolina Pork Council, said “we would rather work with our neighbors to address problems instead of defending ourselves against frivolous nuisance complaints.” 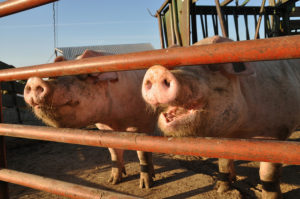