MagazineJanuary 2008The Dirt on Hemlock Hero Will Blozan

The Dirt on Hemlock Hero Will Blozan 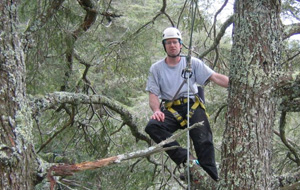 Will Blozan climbs hemlock trees for a living. It might be the perfect job, if he didn’t have to worry about those trees being gone in the next five years. Blozan is the subject of a new documentary, The Vanishing Hemlock: A Race Against Time. It follows the arborist’s quest to save the last remaining stands of old growth hemlock trees in the Southern woods. Hemlocks—some approaching 500 years old—are literally having the life sucked out of them by the woolly adelgid, a non-native insect introduced from Asia. Since 2002, it has been ravaging hemlock populations in the South, especially in Great Smoky Mountains National Park. For the past five years Blozan has dedicated his life to researching and treating hemlock trees in the Southern Appalachians. One of his biggest efforts, the Tsuga Search Project, is measuring and documenting the world’s tallest Eastern Hemlocks before they are exctinct. He’s a lone eco-warrior fighting a seemingly impossible battle, due to inaction by the government and continued public apathy. Although he admits saving hemlocks is a personal crusade for a species he loves, it is also a quest for ecological preservation, something everyone needs to consider.

BRO: When did the hemlock personally become so important to you?

WB: When I worked for the National Park Service in 1993, I was hired specifically to survey and map these trees. Being out there in the backcountry with these ancient trees, the largest evergreen conifer in the Eastern U.S., I was able to develop a certain respect.

BRO: Your company has been contracted by the government to treat trees in Great Smoky Mountains National Park. What’s your assessment of the trees in this daily work?

WB: It depends a lot on the vigor of the trees. I can say that just about 100 percent of the hemlocks in the park have been infested. I’ve seen a lot of mortality this year. I have been treating adelgid since it arrived in 2002, and the trees that I reached right away are doing well. But some that weren’t treated have already died. It only takes five years. The trees that I am treating right now are heavily infested, and a lot of them have died this year, because of the drought. It’s a combination of stresses.

BRO: Now that you are working with the government, can this be reversed?

WB: It’s four years too late. They’ve known about this since 2002 and didn’t start treating until 2005. I don’t know why the Park Service waited so long to get going. They are not putting enough into this. The national park was established to preserve the superlative forest. But they recently received $18 million to repair a one-way dirt road that nobody really uses. That money should be going to save the hemlocks, which are the whole reason the park was established. Some of these forests could have been saved for a couple thousand dollars. The priorities are way off. It’s unfortunate that this lesson had to be learned in the national park, which is the epicenter of these trees.

BRO: You treat trees with Imidacloprid, which is a controversial pesticide. Why do you use this instead of biological controls like predatory beetles?

WB: Research has shown that as long as there’s organic material in the soil, the molecule in the pesticide binds so tightly that it can’t move and leach out of the soil. It’s been proven in a laboratory and a new field study that’s about to get published. The predator beetle has been released extensively, and it just can’t work. It’s true that it eats adelgid, but it physically cannot solve the problem because of sheer numbers. Their numbers cannot match the reproductive numbers of the adelgid. One tree can produce tens of billions of adelgid

BRO: Public apathy is another reason hemlocks continue to perish. Why should our readers care?

WB: To me the hemlock forests represent a link to our past that’s viable in its own right. I realize not everyone appreciates trees like I do, but this is a species that has an impact on people because of its size, shape, and character. Every time I take people into hemlock forests they get really quiet and touch the trees. They have an impact and create a deep connection to the earth.

From an ecological standpoint, there are a number of species that are dependent on hemlocks. Water quality is a big concern. We could have higher flash flood events, and highly acidic water. Hemlocks are wet and spongy, so they moderate high rainfall by absorbing water, and basically prevent flooding. Wildfire could also be a big problem, because we’ll have all of this dead dry wood lying around. Some of these forests haven’t burned in a millennium. With the open sunlight being able to hit the forest floor without shade, dry weather would make these areas a tinderbox.

BRO: Where do we go from here, now that the problem is so widespread?

WB: There are many places out there that still have a lot of healthy hemlock growth. I don’t see any need to choose to let them die. I have no expectations of saving every tree. But there are some super high quality sites, like Fall Creek Falls State Park in Tennessee, which do not have adelgid infestations at this point. We need to encourage people to save these forests, while they still can, and maintain them for the future.

There is a false idea out there that preserving hemlocks is unaffordable, mainly because private companies are charging too much, riding the wave of alarm. The chemical is cheap, and the application is easy. I don’t understand how we as a human species can let another species go extinct, when there’s a reasonable, affordable option.

BRO: What’s the goal for you in being the subject of this film?

WB: I want my kids to be able to visit a healthy hemlock forest. My goal is to alert people to how serious this pest is and how quickly it kills. But also they need to realize how easy it is to save these forests. Public landowners need to do it. It’s a black and white situation. If this was happening in Redwoods National Park, I guarantee there would be a huge effort to make a difference.