The pain struck with a short, sharp, shock. Unlike the usual pains I have met while trail running, this one didn’t introduce itself to my knees or feet. No, this pain hit me squarely in the back of my head.

Tree branch? I stopped and wondered. Suicidal squirrel? I looked around. Save for the freshly fallen leaves of an autumn’s afternoon, the trail lay bare. 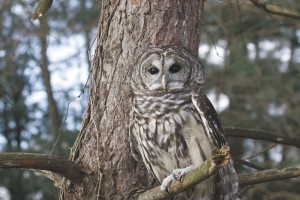 I took off once more down the trail. Back in stride, my mind began wandering. Why do I run? To keep from falling. I mean that literally—the you-had-better-stay-on-the-tips-of-your-toes-and-clear-those-rocks-as-you-earth-surf-down-this-mountain-or-you’re-dead-dude kind of falling. But running also keeps me from falling figuratively, as in the you-had-better-stay-on-this-path-that-has-you-running-after-grace-in-the-woods-instead-of-chasing-after-(insert unhealthy addiction of your choice here)-or-you’re-really-dead-dude.

The pain struck again, in the exact same spot. Once more, I saw and heard nothing, but this time I was bleeding. I could feel the drops of blood trickling down the back of my head and onto my shoulders. It’s gotta be a bird, I figured, and scanned the trees for natural born snipers. That’s when my attacker revealed herself, swooping in and perching on a branch just a few yards away—a barred owl, and a big one, too.

The owl, of course, said nothing. She simply sat in serene silence and stared with those twin, black, bottomless eyes.

I thanked the owl for sharing this moment with me and allowing me to pass through her woods. But when I began running down the trail, she raised her wings and prepared to launch at me again.

I was wearing a running belt, shorts, and shoes (X-terra ‘Talons’ by the way—I’m sure it was just a coincidence). When the owl attacked for a third time, I took off the belt and began rhythmically swinging my water bottle over my head like a sling shot. She launched when I was about thirty yards out, coming straight for me on a glide about six feet off the ground. I’ll admit, I felt a flash of fear, and my first thought was to drop the belt and duck and cover. But then, as the distance quickly closed and our eyes locked, the exhilaration kicked in as I knew I had my rhythm right—that when that bird reached the swinging circle, that my water bottle would be there to greet my guide with a hearty hello upside her feathered face.

I’ll never be able to prove this, but it sure seemed that owl was doing the same thing, calculating the various trajectories to decide whether she could safely pull off another tear with her talons. But for what purpose? To protect a nest? To get revenge because I scared off a chipmunk she had wanted for lunch? To give me a death by a thousand cuts and eat well all winter? To be a spirit guide? I honestly don’t know. I just know that, at the last possible second, she swooped up out of range and flew off into the forest, leaving me alone to wonder.  BRO