The Return of Gravity

The Surprising Rise of Downhill Mountain Biking in the South

Ever wonder what those first mountain bikers were thinking? We’re talking about a small group of road bikers in the mid-1970s, who, for whatever reason, decided to ditch the pavement and push their beefy cruiser bikes up Mount Tamalpais in Northern California. From the top of that rocky peak, they pointed their bikes downhill and descended the dusty singletrack back to the road, nearly melting their brakes in the process. You could say something poetic about the pioneering spirit of these first mountain bikers, pushing societal boundaries and whatnot. But if you’re looking for a simpler explanation for those first mountain bike rides, you could put it like this: Those dudes wanted to go downhill, fast, on sketchy terrain.
The same pursuit of unadulterated joy still attracts people to the niche sport of downhill mountain biking today. After a sharp decline in popularity in the first half of this decade, downhill biking is on the rise, particularly in the Southeast, where bikers have traditionally focused on the endurance side of the sport. This year, more downhill races are being produced below the Mason-Dixon than ever before, and mainstay races like the Massanutten Yee-Haw! saw record numbers from pros and amateurs alike. Meanwhile, Southern pro downhillers are finding themselves on the podium on the professional circuit, and a fresh crop of talented junior riders are poised to take over the downhill scene. The Southeast is becoming a hotbed of downhill biking, which may come as a surprise since the Southern Appalachians lack true downhill trails. 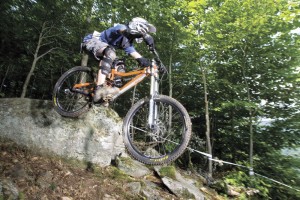 Swimming With Sharks
It would be easy to put downhill mountain biking in the same category as, say, swimming with great white sharks. From an outsider’s perspective, the sport basically looks insane. Bikers strap on enough protective gear to withstand a small explosion, then hurl themselves off a mountain on a 30-pound bike as fast as they can, riding over obstacles that a sane person would do anything to avoid. Speeds are high, and given the traditionally steep and technical terrain, so are the consequences if you make a mistake. Ride downhill long enough, especially as a racer, and it’s not a matter of if you’ll get hurt, but when.

“Just about my whole riding crew is out with injuries right now,” says Troy Roberts, a Tennessee-based amateur downhiller who’s building downhill-specific trails on a piece of private property outside of Chattanooga. “That’s just how it goes. You get hurt, you take time off, you come back and ride again.”

Ask Roberts why he got into downhill biking in the first place and he’ll tell you simply: “I wanted to jump and go fast.”

Consider the nature of the sport, the high rate of injuries, and the inclination of racers to push the envelope, and you’ve got the recipe for a classic “extreme” sport. That’s certainly how downhill has been labeled, particularly during its heyday in the mid to late 90s, when downhill ruled the cycling world. During the grunge decade, races pulled 1,000 participants, national events had TV coverage, and corporate sponsors threw money at racers who could go faster and jump bigger than the rest of the field.

“Yes, our sport is extreme, but the word ‘extreme’ should be in quotations,” says Mike Valach, a former pro downhiller who rode the popularity wave of downhill through its peak and crash, winning a NORBA National Downhill title in the process. “Typically, you only see the gnarliest downhill stuff in magazines and videos, but it’s not all that serious. Downhill is more inviting than that, particularly now with the evolution of trail building.”

Valach is talking about the advent of machine-groomed trails: fast, flowing paths with a smoother tread and wider corridor than the traditional singletrack that’s pervasive throughout the Southern Appalachians. These newer machine-groomed trails focus more on high-banked turns and jumps than the technical challenges of classic downhill trails that were all the rage in the 90s. Every year, more national-caliber races are relying on machine-groomed trails for their courses, as bike parks like Snowshoe put more energy into building these fast, fun, more inviting trails.

Snowshoe Mountain Resort has the most comprehensive lift-served downhill terrain in the region. The trails include super-steep, rocky descents to their two newest trails, Raging Bull and New Basin, which are machine-built with smooth transitions, high banked turns, and jumps that pros can hit big or beginners can simply roll over.

“We’ve still got the old-school trails,” says Mike Baker, Snowshoe’s bike park director, “but our terrain is evolving as the sport is evolving. In the last five or so years, most bike parks have been focusing on machine-groomed flow trails designed to ride with as little breaking as possible.”

Along with trail design, downhill bikes have evolved since the first heyday of the sport, enabling riders to tackle new terrain. That same technology has trickled down into lower price point bikes, so a wider spectrum of riders can now purchase a good downhill bike for the same price as a good cross country bike.

“I see downhill biking taking the same evolution as downhill skiing,” says Trevyn Newpher, a pro rider who teaches clinics and private lessons at Snowshoe.  “When people started skiing downhill, they were considered a bunch of renegade daredevils. Now, skiing is mainstream. Downhill biking is making that same transition.”

While downhill is still overshadowed by more mainstream cross-country biking, its popularity is expanding rapidly, and surprisingly, the fastest growing demographic for the sport is 30 to 39 year olds.

“We sell most of our lessons to adults,” says Mike Baker of Snowshoe. “These are people who’ve ridden cross country or BMX and are finding their way into downhill a little later in life. We even see a dozen over-50 riders in our race series.”

And this year, more Southern resorts are churning their lifts for bikers during race weekends. The Massanutten Yee-Haw! is one of the longest standing lift-served downhill races in our region, but this year, Beech Mountain in North Carolina is hosting a three-race series, as is its neighbor Hawksnest. Meanwhile, Snowshoe is continuing its popular four-race series. And a number of grassroots events are pulling in record crowds from all over the Southeast. The Clemson Downhill race in South Carolina saw 160 racers. An annual race at Paris Mountain State Park near Greenville pulled in a similar field.

“That’s more than you’re going to find at most cross country events around here, and on par with numbers you see at the bigger downhill race series like Gravity East,” says Richard Beytagh, who runs Morewood Bikes’ USA, a downhill boutique manufacturer. “And these are just locally organized events without much sponsorship and little to no cash for the top finishers. The demand for these races is exploding around here.”

what goes up, keeps going up
There aren’t many true downhill trails in the Southern Appalachians that are accessible without a lift ticket. Snowshoe has 1,500 vertical feet in a single descent, and most of the smaller resorts in the region have 700 to 1,000 vertical feet of bike-able drop, but finding that sort of vertical drop in national forests or state parks is rare.

“Most of our long downhills have an uphill in it,” says Thomas Jenkins, president of the Shenandoah Bicycle Coalition. Sure, there’s a 2,000-foot vertical descent, but in the middle there’s an extensive climb, or a long flat section. It’s not big bike material.”

Despite the paucity of decent downhill terrain,  the Southern Appalachians surprisingly produces some of the country’s top gravity pros. Christopher Herndon is a pro downhiller from Brevard, N.C., who won the dual slalom national championship in 2007. Geritt Beytagh, from Fletcher, N.C., won the 2008 downhill national championship, and is currently leading the pro field in the Gravity East Series. Georgia’s Ethan Quehl is right on Beytagh’s heels in the Gravity East series, and was one of only 21 mountain bikers to represent the U.S. in the Pan American Games this past spring.

“Even though we don’t have true downhill trails in our forests, I think riding a cross country bike in a place like Pisgah is some of the best preparation you can have for downhill racing,” says Herndon.

2008 downhill national champ Geritt Beytagh agrees: “You can always tell a rider from the East Coast. They’re very precise in the lines they choose and they have great handling. So you get all that technical training, plus the fitness level at the same time, because you’ve got to pedal uphill around here.”

But Herndon has decided not to rely entirely on the terrain and climate of the Southern Appalachians to produce the next generation of downhill superstars. He recently created GROM Racing—the only downhill race team in the country entirely devoted to developing junior racers. All of the riders are from this region.

GROM racers have dominated the podiums at races up and down the East Coast, with 16-year-old Lauren Daney and 17-year-old Sam Pensler looking to qualify for the Junior World Championships in Quebec this year.

“This is a huge opportunity for me,” says Pensler. “This kind of support, coaching, and mentoring from top riders is unheard of.”

Geritt Beytagh thinks GROM is exactly what the sport of downhill needs if Southeastern riders want to compete at the highest levels.

“There’s a lot of talent out there, particularly among the younger riders, but they’ve been left on their own to figure out how to race. Because it’s not an Olympic sport, there aren’t a lot of sponsorships. Herndon stepping in with GROM is huge. Those kids are the future of our sport.” •

POINT YOUR BIKE AND GO
While ski resorts hold the most obvious downhill terrain in the Southeast, there are a handful of downhill trails you can tackle without paying a “cover charge.” However, keep in mind that you may have to—God forbid— pedal your bike uphill at times to get there.

Sulphur Springs
Paris Mountain State Park, S.C.
Home to the Paris Mountain Downhill race, Sulphur Springs descends the face of Paris Mountain, dropping 700 feet in 1.5-miles via a line of tight, technical singletrack that’s littered with considerable drops. An access road makes it easy to shuttle this trail, but the park is closed to mountain bikers on Saturdays.

Carters Lake, Ga.
SORBA has built two runs on the edge of Carters Lake in North Georgia. The intermediate run is fast and flowy, but the expert run features gap jumps, rock gardens, and tight switchbacks. The vertical drop isn’t significant, but the technical challenge is superb.

This ATV park outside of Knoxville, Tennessee has the most technical downhill-specific trails in the Southeast. The bike-specific trails and dirt jump park are easy to access by car shuttle. But the terrain is tough, so beginners beware. The land is owned by a coal company, so blasting is common. In fact, the top half of the downhill trails was recently mined, cutting many descents in half. $17 day pass; $88 annual pass.

Trials Training Center, Tenn.
Sequatchie Mountain is home to the 700-acre Trials Training Center, developed for  motorcycles. Two downhill bike races have already been held at the center, attracting amateurs as well as top pros. Half a dozen trails are on the ground, with plans to add more trails off steeper faces in the near future. $10 daily pass.