Go OutsideA Look at Five Blue Ridge Rails to Trails Systems You Should...

At its birth, the railroad was complexly tied to what it means to be American. Through innovation it brought our nation the chance to expand and explore our land. Even as travel by train has dwindled to novelty, Americans are still finding a way to use the railroads to see, explore, and appreciate our country.

According to the Rails-to-Trails Conservancy: “The idea: to convert the abandoned or unused rail corridors being closed in increasingly large numbers—by the consolidating railroad industry—into public trails.”

In 1986, Rails-to-Trails Conservancy was established as a way to find use for the railroads after they were retired. Rails-to-Trails (RTC) is a non-profit organization dedicated to building a network of paved trails from our nation’s former railroads. Today, the organization manages 30,000 miles of rail-trails and other multi-use trails with 8,000 miles more of potential trail. They have connected and enriched hundreds of rural and urban communities by converting retired railroads into dirt and paved trails.

These trails have created a safe and viable means of transportation and physical activity while also providing a way for our country’s citizens to get outside.

Tracing the route of the Georgetown Branch rail line of the Baltimore & Ohio Railroad, the Capital Crescent Trail runs from Silver Spring, Maryland to Georgetown, D.C. Connected with nearby Rock Creek Park, this trail is paved and unpaved at times offering up to a 22 mile loop. 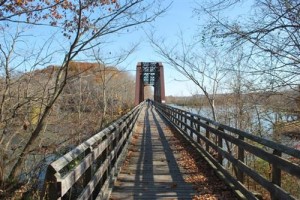 One of the best parts about Music City is how easily its urban inhabitants can get out to Central Tennessee’s backwoods. Only 20 minutes Northwest of Nashville, the Cumberland River Bicentennial Trail offers locals a 6.5-mile nature trail, which includes six different trestle bridges over the Cumberland River.

Starting in Durham, NC the American Tobacco Trail winds south through Chatham and Wake County. This year a bridge opened that connects the Northern and Southern parts of the trail over interstate 40. The bridge’s construction has created 22 miles of uninterrupted trail for people on foot and wheels while the Southern portion is open to equestrians.

Once a portion of track of a luxury passenger train that moved from Birmingham to New York, this 61.5-mile railway has now become the Silver Comet Trail. The trail’s rich railroad history and length make it idle passage for amble walkers and spinning cyclists. 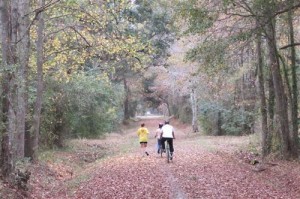 The West Ashley Greenway is a jewel of the Palmetto State. Greenway goers are promised smooth trail from inner Charleston, S.C., to the adjacent more rural John’s Island where dirt trail gives way to gravel road. It’s on this rail-trail that you can glimpse the South Carolina Low country’s wildlife in all its sublime marshy awesomeness.

For more information about possible rail-trails in your area visit Traillink.com.