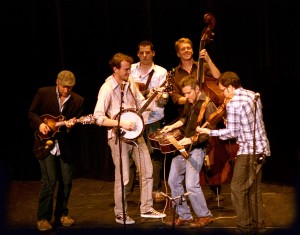 On the strength of their first two records and a relentless touring schedule over the last few years, The Infamous Stringdusters have established themselves as one of the hottest acoustic acts in the country. With the recent release of their latest record, Things That Fly, they are branching out, displaying an evolution in their songwriting and a willingness to defy the conventions and expectations that come with being labeled a bluegrass band. BRO recently caught up with Travis Book during a stop in Connecticut to chat about the tour, the new album, and rehabbing from a skiing accident that happened during their West Coast Ski Tour in Feb.

BRO: This tour seems more aggressive than your tours past, especially when you consider some of the larger, standing-room venues you have been (and will be) playing.

TB: We’re cultivating an experience, not just putting on shows. Some people want to sit and listen, some want to dance, some want to have a beer and unwind with friends, others want to engage in the music fully. We’re moving toward only playing venues that allow all of that, so it’s a transition, but it’s working. I hope that “standing only” doesn’t become our MO. There’s always going to be people like my father who love the band but want to have a seat and we have no intention of alienating them, or anyone, for that matter. Finding the right venues that have all of that, a great sound system, big enough stage and are the right size for that market is tough and there’s some experimenting that is going on right now.

BRO: You guys hung out for a week at Haunted Hollow Studios near Charlottesville.  How was that?

TB: Best recording situation I’ve been a part of. The right vibe is tough to find in a studio, but that place has got it all, in spades.

BRO: Did the band have a different vision for TTF than it did for the first two records?

TB: Absolutely. Instead of capturing what we sound like when we sit in a circle and play acoustically, we explored all the potential of the studio, introducing textures, sounds and instruments that we’d not used before. We also ended up with something that held together conceptually, had a common thread, which was part of the vision. A lot of bands talk a big game about concept albums. We didn’t set out to make a concept album, but as we honed in on the songs, we found there was a common thread between a lot of the music. A message, even. Life’s a trip, get all up in there, get your feet wet, open your eyes, be present, and it’ll all turn out alright. 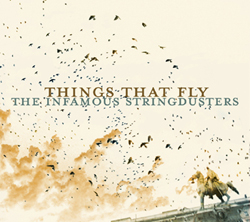 BRO: Any advice for our skiing readers?

TB: Ski ’em like you stole ’em! Life is short and ligaments heal, tree skiing is absolutely worth the risk, always, always, always wear a helmet and take a cell phone.

Travis, his surgically repaired left knee, and the rest of the ‘Dusters will be at Kirk Avenue Music Hall in Roanoke on Wednesday, May 12. If you want to win a pair of passes and catch the show, be the first person to email [email protected] by 11:00 A.M. on Tuesday, May 11. Put “Roanoke” in the subject line.

Stay tuned to www.blueridgeoutdoors.com for more ‘Dusters trivia and ticket giveaways as the band swings through the Southeast.