Parenting Adventures on the Pump Track

The pump track in the backyard is sodden and sad, one side of it filled with a Tonka-truck-filled mud puddle.

The winter was hard, pounding snowstorms onto it back-to-back for two months. Not only did it wear it down, but we dug a bobsled track across it. The berms are lower and round, there are rocks and sticks embedded into it, and the dirt is loose and slick. It needs some love.

Last summer my 6-year-old would go out there, even before breakfast, and groom the track in between laps. He would push the broom around it and pluck pinecones and debris out of the dirt. He’s left a lot of blood on that track—even a tooth.

His front two teeth were loose, and we kept bugging him to wiggle them so they’d fall out, but he wouldn’t do it. The only way those teeth were coming out was if the dentist pulled them out … or they were knocked out.

Flashback: It is a hot summer afternoon where Lightning Bolt Elijah and Thunder Bolt Mama are taking turns showing their “moves” around the track.

He picks up speed and heads high into the berm, executing a perfect lean. He is almost laughing, his mouth open as wide as his eyes. I suddenly have a motherly sense of unease just as his front wheel drops into the small gap between berms. He is not yet strong enough to pull it out, resulting in the front wheel washing out. He dives headfirst over the handlebars and bites the berm. A low, sinking feeling in my belly indicates that this truly is not good.

I’m confused because I don’t hear him screams. He finds his breath, and begins to scream. I am there, scooping him up and keeping him still so that I can assess the damage. I don’t want to freak him out, so I don’t immediately look at his face. Instead, I look at the ground.

There it is. His front tooth is in the berm. I look for the other one, but I don’t see it. I’m dying to look, but he’s still freaking out. I pluck it from the ground.

“Oh, baby, LOOK, you lost your tooth,” I say, trying to make light of the situation. “That was the ONLY way it was coming out, right?!” 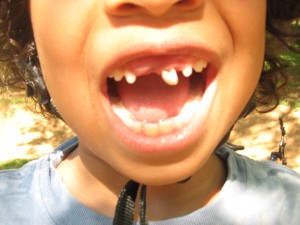 I couldn’t even remind him that the Tooth Fairy would be coming before he returned to the wailing. It didn’t last long, as he too was dying to see the tooth. Blood was all over both of us, and the other tooth was still in his mouth. Backwards. There was no way he was letting me pull it out or turn it back around.

That’s when dad ran out of the house to see what happened. Once he saw the blood, I had to send him away with errands to calm him down. “The root is broken off in his jaw!” he cried, “He’s got a concussion! We’ve got to go to the emergency room! There’s so much blood!” This is NOT how he acts when I am hurt.

After a long snuggle and a popsicle, I decided to take his mind off of it with a motorcycle ride. I felt so bad for him that I even stopped for lunch at that place with the chicken nuggets. I teased him about letting me pull the other tooth out when, instead, a morsel of deep-fried trans fat did the honors.

“That was fun!” he said, spitting out both the nugget and the tooth.

I know that the pump track will be back in shape in no time. I push my 2-year-old around the track on his 12” bike that he doesn’t yet know how to pedal, and I wonder what this summer will bring.