What are some of the top trout hikes available to readers of Blue Ridge Outdoors? Here are a few of my favorites.

The Native Americans took advantage of western Virginia’s warm and aromatic springs as a tonic for various illnesses long before the European colonists stumbled upon them. Since then, folks from every walk of life—including Thomas Jefferson—have come to aptly named Bath County’s springs to “take the waters.” I head to Bath County to take the waters, too—to fish, rather than to soak.

A series of waterfalls called The Cascades, located on property owned by the Omni Homestead Resort, is ideal for fly anglers, with both a solid population of fish and easy access. The lower end of the stream is stocked with large Kamloops rainbows; this area allows for fairly long casts and room for the feisty fish to run. Anglers can wade out here and attempt to cast into some of the deeper pools or try their hand at very technical casts near downed trees and other structures. The slow, clear waters give the trout a distinct advantage here, so move carefully and avoid too many false casts.

As fly anglers climb to the top of the stream, they are rewarded with a rich view of moss-covered rocks and one beautiful waterfall after another. Best of all, visiting anglers can cast small flies and test their skills against wild naturally reproducing rainbows, which seem to inhabit the bottom of every waterfall. Guide Matt Thomas says that he consistently has to remind anglers to watch their step: “It’s not that it’s dangerous to fish here, but it’s just so darn pretty that people are looking everywhere around them except where they’re placing their feet.”

Guests of the Omni Homestead Resort can fish the area for free; outside guests can fish for a nominal fee.

Hampton Creek, a public fishery in the eastern end of the Volunteer State, is ideal for hiking and small-stream fishing. Mike Adams, a hard-core fly angler whose easy manner and quiet confidence makes him the perfect fishing partner, has fished the waters of Tennessee for decades. He usually fishes this water with his trusty Tenkara rod and only a handful of flies. While Adams takes on this moderately difficult hike with the steel and grit of a mountain man, he’s as gentle as a lamb when it comes to landing and releasing the native trout.

Hampton Creek borders a hiking trail, which in turn links up to the famed Appalachian Trail. Hampton Creek is a wild brook trout stream with significant canopy cover and lots of moss-covered rocks. Though you’ll wish you were part billy goat by the time you reach the creek, the natural beauty and the fishing will make the trek worthwhile.

Pocahontas County, W.Va Rightly called the “Birthplace of Rivers,” Pocahontas County seems to have an endless supply of good trout water. Among the best known rivers here is the Elk, which goes underground in some places during the summer months as a result of low flows. Though I love to fish the famed Elk, I often focus on the Williams and Cherry Rivers instead because both see less pressure and have easy access. Camping is also available at designated areas near both rivers should you wish to take along your tent.

My introduction to West Virginia trout waters came courtesy of native Mountain State resident and fly fishing guide Gil Willis, a committed skier and snowboarder who puts his winter gear away once the snows have gone. “While West Virginia is seen as a playground for winter sports,” Willis says, “our trout fisheries are often overlooked.”

Large in-stream boulders mark both the Cherry and Williams Rivers. Fishing all the nooks and crannies of these two rivers could easily take the methodical angler a couple of weeks. While climbing in and around the banks of the rivers is a challenge, a great little hike is just around the corner.

The Falls of Hill Creek Trail lies directly between the Williams and the Cherry and offers a beautiful diversion surrounded by lush canopy cover—and no fewer than three waterfalls. The middle falls on this hike spans an impressive 70 feet and is one of the highest in West Virginia. Though the first 1,700 feet or so of the hiking trail is paved, the rest isn’t. A boardwalk combined with a series of metal stairways leads you down and around a mountain stream.

The Oconaluftee River, running through parts of Great Smoky Mountains National Park and onto lands that belong to the Cherokee Nation, is home to both healthy rainbows and feisty brown trout. You will find easy access to the river from multiple road pull-offs, and you can wade the river with ease—but high banks can make getting in and out of the river a challenge. Inside the park, the narrowness of the water means the Oconaluftee is more of a creek than a river; in other places, however, the river is so wide that casting from one bank to the other is beyond the average angler’s ability. The river is strewn with large rocks and features undercut banks and a good tree canopy, giving local trout the edge over visiting anglers.

Eugene Shuler, longtime guide and owner of Fly Fishing the Smokies, knows the Oconaluftee—and nearby Tuckasegee and Little Tennessee—like the back of his hand. He brings beginners to the Oconaluftee, he says, because “there are lots of fish in this river, and they tend to be cooperative if you wade carefully and present your flies the right way.” Unfortunately, when it comes to Oconaluftee trout, “their strikes are so fast and so subtle that some anglers don’t even know they’ve gotten a bite before the trout is gone.”

You’ll need a regular state fishing license and a trout stamp to fish in the national park, but fishing on tribal lands requires a special permit that is issued solely by the Cherokee nation. A fly-fishing-only section on tribal lands is surely worth a look because they have their own hatchery from which they frequently stock the river.

While you’re in the area, hop on the Oconaluftee River Trail that runs alongside the river. The trail begins at the Mountain Farm Museum at the Oconaluftee Visitors Center and travels 1.5 miles to the outskirts of Cherokee, N.C. This trail is one of the two paths in Great Smoky Mountains National Park on which visitors can walk dogs and ride their bikes. (The other is the Gatlinburg Trail). The Oconaluftee River Trail hike is more like a stroll because it’s relatively flat; nevertheless, a handful of hills keep things interesting. If you arrive in Cherokee after May 1, you can check out the newly opened Fly Fishing Museum of the Southern Appalachians, which houses all manner of fly fishing memorabilia. 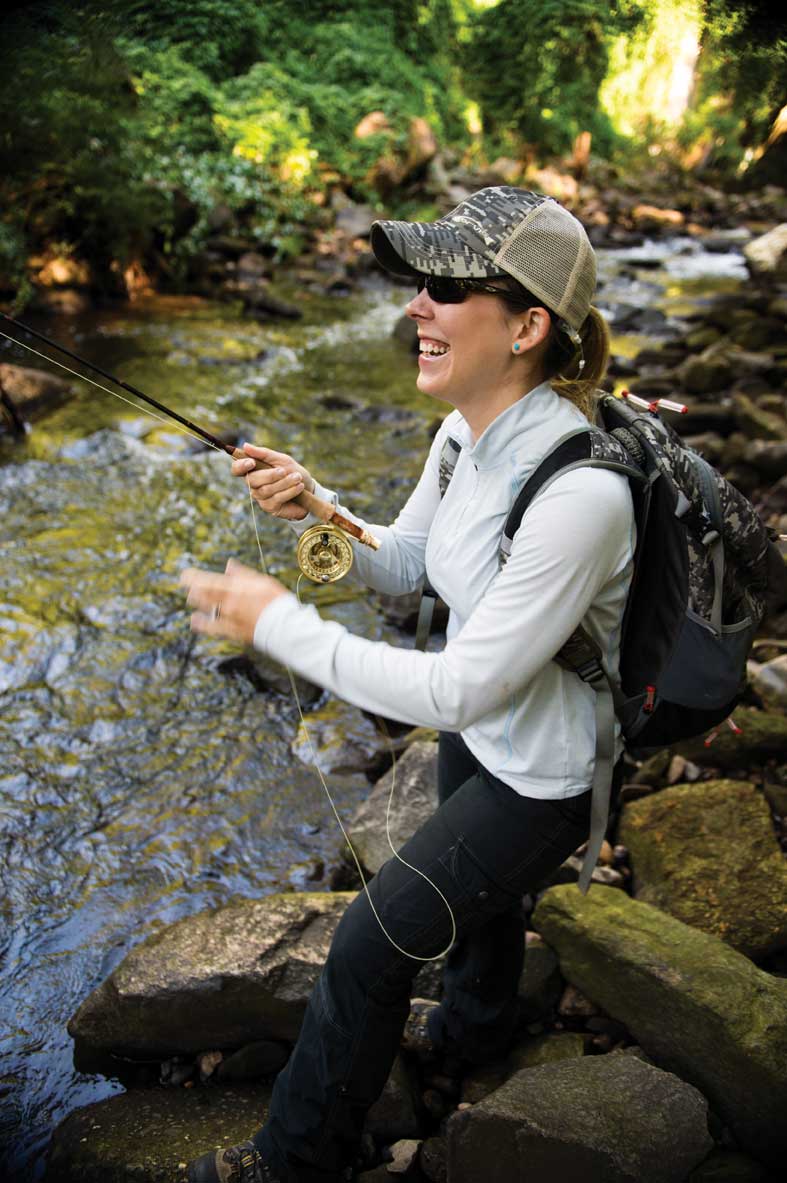 The St. Marys River is not for rank beginners and can be intimidating even for the more experienced angler. At first blush, the St. Mary’s is much more like a creek than a river, and low water conditions here can make fishing tough. Second, the river can’t seem to make up its mind which way it wants to run—sometimes east, sometimes west, sometimes seemingly in both directions simultaneously, branching around small islands that cause you to lose sight of the main river.

Third, this constant changing of course is illustrated by the large amounts of stone on each side of the river banks, which make walking up or downstream quite difficult at times. Finally, the water is gin clear, making a stealthy, cautious approach a must for those who hope to bring the St. Mary’s sly mountain trout to hand. The river is easily accessed off of Fire Road 41—but that’s where the easy part ends.

Although Maryland’s Gunpowder Falls is nearly 53 miles long, most fly anglers concentrate on three sections covering about 17 miles. The first section, stretching from Prettyboy Dam to Falls Road, is entirely catch-and-release and may be fished by traditional anglers as well as fly rodders. Hiking into and around the river here is a must. Despite the nearby parking lot, this section’s grading is best left to people with good knees who take their time making their way to the water.

The second section of the river, which runs from Falls Road to York Road, is that classic trout river of which purists dream—runs, riffles, the occasional long pool—and yet one needn’t be part billy goat to move around. Yes, the walking is easier—but there is also a bit less cover, which means that the fish can be easy to spook. You’ll still find plentiful undergrowth and ferns, so take your time and watch your step.

The third frequently fished section of the river, which is deeper and much slower than the other two, stretches from York Road to Bluemont Road. The last two sections of the river are popular with canoeists, though you’ll probably only spot canoes on weekends.