By Stephen Regenold
09 Aug 10
The twice-annual Outdoor Retailer trade show, this summer held in Salt Lake City from August 3 – 6, is a peek at the future of outdoors gear. From shoes and gadgets to mountaineering tents, the pre-release equipment on display is a look at what gear shops will stock in 2011. Here are a few highlights from the trade show floor. 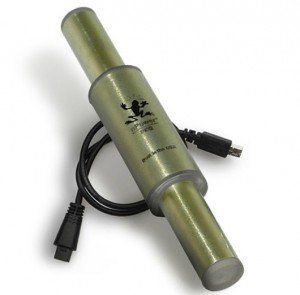 -Power Walk
The nPower PEG device can capture and store kinetic energy you generate by hiking, jogging, or biking. The PEG product — which stands for Personal Energy Generator— is placed vertically in a backpack as you hike. It makes energy through the up-and-down movement derived by walking. The $150 device stores energy and then lets you use it to charge your phone or GPS device.

-Crank-Arm Water Purifier
The SteriPEN Sidewinder has a crank arm to power its water-purifying, UV-light mechanism. The result is a protozoa-zapping contraption that purifies suspect water and can go completely off the grid. Step 1: Fill the unit’s one-liter bottle. Step 2: Flip the bottle and Sidewinder upside down and unfold the handle. Step 3: Crank until green LED indicates successful purification. Step 4: Drink up! Available in September for $99.95. 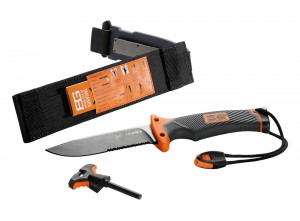 -TV Knife
Bear Grylls, host of the television hit “Man vs. Wild,” has designed a knife with Gerber. The first product in a line, Gerber’s Bear Grylls Survival Series Ultimate Knife, has a full-tang, partially-serrated, stainless-steel blade. The sheath stores Bear-inspired tools, including a sharpening stone, magnesium fire starter and a weatherproof survival guide. Available in October for $60.

-Light Tent
England’s Terra Nova Equipment has reached new lightweight horizons with its 1 pound, 1 ounce Laser Ultra tent. It’s made for one person and is touted as “the lightest double-wall tent in the world.” (The two-person Laser Photon 2 weighs a smidge more at 1 pound, 15 ounces.) There are literally trail-running shoes that weigh more than this tent!

-Cut-Out Camp Pad
The Klymit Inertia X Frame, $99.95, packs down to the size of a soda can. It inflates with normal air or a C02-like cartridge gun from Klymit that pumps in insulating argon gas. The 72-inch pad weighs about 9 ounces. It is made from rip-stop nylon and is “body-mapped” with cut-outs to support a sleeping frame.

-Paddle on Top
Kayak maker Necky has built its first sit-on-top boat in nearly a decade. The Vector 13 model, $899, is touted to blend the comfort and stability of a sit-on-top with the efficiency of a touring kayak. The company says the Vector 13’s seat was made to prevent common leg and foot fatigue associated with paddling long distances. The boat is 13 feet long, 29 inches wide, and it weighs about 59 pounds.

-Keen Racer
In a major diversion from its usual design, Keen introduced the A86 running shoe. Instead of an oversized toe guard and a thick sole, the A86 draws inspiration from racing-flat running shoes. The $90 shoe includes a breathable mesh upper, a flexible midsole, and gripping 3mm traction lugs on the sole.
—Stephen Regenold writes about outdoors gear at www.gearjunkie.com.
Share
Facebook
Twitter