The Pace of Paddling: Learning from the French Broad at All Speeds

After about three hours on the French Broad River, my arm muscles start to burn and I begin to regret my decision to try out the 20-mile stretch that the participants of the upcoming Riverfest Canoe Relay will traverse. Turning to my paddling guide Jayne for reassurance, I frame a half-statement, half question: “We’re going at a pretty moderate pace, wouldn’t you say?”

Jayne Fought, a local outdoor instructor and educator, pauses for a quiet moment before responding, “Well, I’d say more of a casual pace”. My shoulders hunch. “So, how much faster do you think individuals racing the canoe relay could travel?” 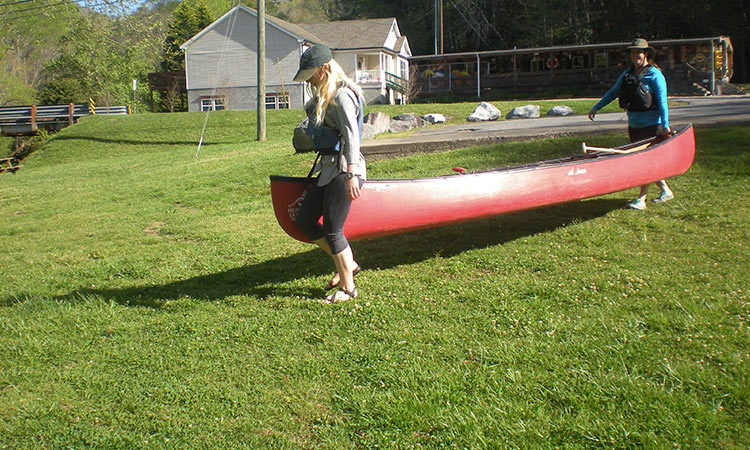 Jayne nods in a thoughtful way before explaining, “If you wanted to go fast, you’d be on your knees, not sitting, to power through each stroke with your core. Really good paddlers would count their strokes, coordinating together to alternate sides in unison.” Jayne demonstrates a quick, repetitive arm motion, several times faster than my own relaxed pace. “ I suddenly feel more tired than before.

Jayne had generously offered to take me out on the relatively calm stretch of the French Broad that would be covered in the Canoe Relay conducted by Headwaters Outfitters as part of the Upper French Broad Riverfest on June 23rd. Starting at Champion Park, Rosman, the river’s clear and fish-burdened waters wind across Transylvania County, passing through farmlands, under bridges, and alongside diverse local communities. 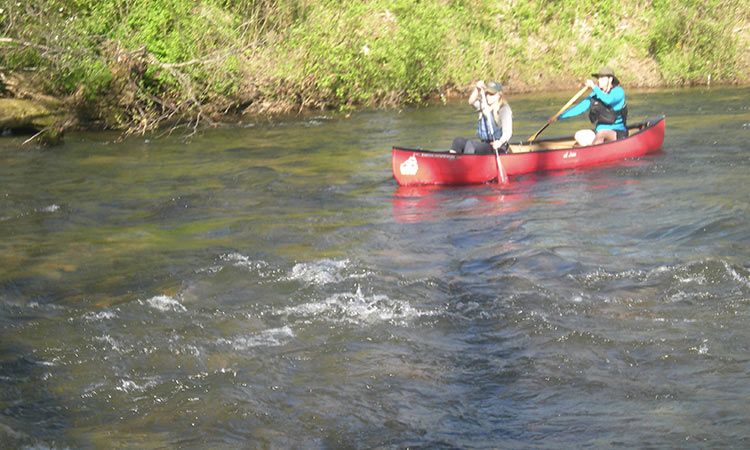 While our own canoe trip didn’t have the same intensity of racing and competition that some teams will undoubtedly bring to Riverfest, the five hours Jayne and I spent on the French Broad offered its own rewards, revealing a unique perspective on the natural world. We played chase with a white egret, flying ever just out of sight, while other birds–herons, hawks, and turkey vultures–eyed us lazily from their tall tree perches.

Silt in the water glistened like flecks of gold, and new leaf buds colored the banks with an almost surreal green.  “It doesn’t matter what time of year you get out, it is always going to be the most beautiful time,” Jayne had remarked during our trip, as she surveyed the sunny spring morning. 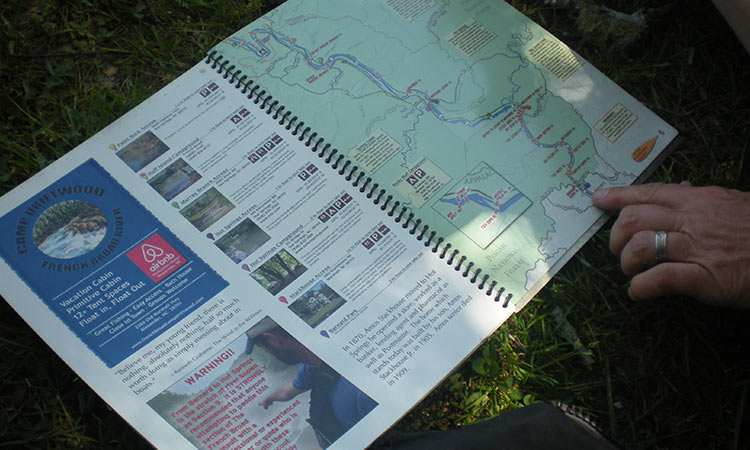 Just as it revealed a unique perspective on nature, the 20-mile course also demonstrated the diversity of community and history built up alongside the banks of the French Broad. Worn chairs and picnic tables spoke of private riverside getaways. Stranded cornhusks and wide-eyed cattle are evidence of the farms located on the floodplain above. Old cabins and abandoned industrial installations remind you of times past, while carefully maintained public access points to the future of the newly designated paddle trail.

Caught up in these surroundings, it was only hours later that I recognized how the paddle trip had also served as a perfect backdrop for the long conversation held between Jayne and myself. Supported by the river’s quiet yet steady flow, topics ranging from childhood memories to local politics to future outdoor adventures wove seamlessly together. 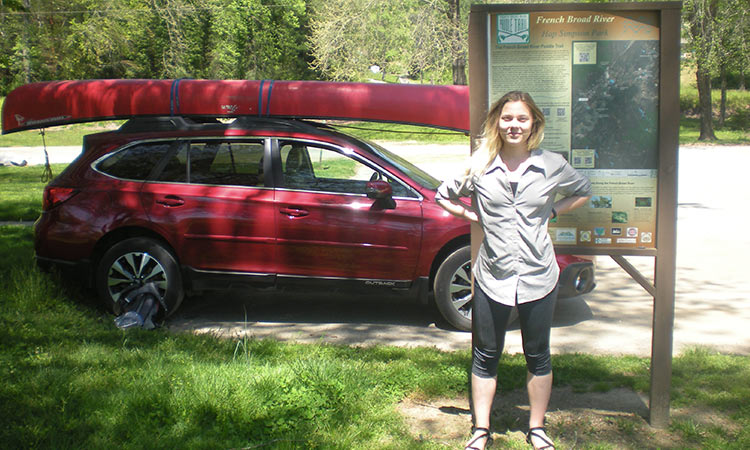 Easing into Hap Simpson Park at the end of the day’s journey, I felt a bittersweet tug between the accomplishment of finishing and the disappointment that the trip was over. While I may not be coming in first place any time soon for the Canoe Relay, I learned that choosing to spend a day out on the river encompassed not only sport and exercise, but also an appreciation for nature and the community that make up Transylvania County.

The Upper French Broad Riverfest will be held in Champion Park, Rosman on June 23rd from 10am-3pm. The Canoe Relay will take place on the same day at 9:30 a.m. For more information and registration and entry forms, visit their website or email [email protected]